How Weight Loss Surgery can Help with Cancer 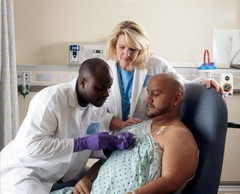 There are a lot of health issues that plague the United States today. Some of which are a mystery that we are unraveling and others that we already know the cause of. Two of the biggest problems in our country that involve our health is cancer and obesity. Both of them have spread like a plague all across the United States over the last few decades and have taken countless lives. So, doctors have been scrambling to try and figure out ways to prevent and cure both problems. Then, someone had a thought. What if they are connected? What if obesity and cancer were directly related? So, we are going to look at the possibility of the connection between cancer and obesity. Then, we will look into seeing if weight loss surgery can help or not.

Cancer, according to cancer.gov, is a process when cells reproduce at an abnormally rapid rate.  “Normally, human cells grow and divide to form new cells as the body needs them. When cells grow old or become damaged, they die, and new cells take their place. When cancer develops, however, this orderly process breaks down. As cells become more and more abnormal, old or damaged cells survive when they should die, and new cells form when they are not needed.” The dangerous thing about it is that once the process starts, it is far less likely it is going to stay localized in one area. Cancer cells spread and invade other tissues, reproducing rapidly, the more it spreads.  It can even form a lump of hardened cells called a tumor, and the size of them can grow to the point where it creates massive damage.

Obesity is a condition in which fat cells between the skin and muscle grow at a rapid rate.  Eventually, they will grow enough to cause a severe increase in weight, which adds extra work for muscles, joints and the circulatory system. Eventually, the fat cells will also grow on the organs, can run through the bloodstream and thicken the arteries. If untreated, it will expand to a point known as morbid obesity, a form of obesity that will decrease a person’s lifespan and quality of life.

Already, we can see a similar pattern at play. Both diseases are conditions in which cells are rapidly reproducing and expanding into different territories. But do we know definitively if one causes the other? Also, is weight loss surgery the cure for such a thing?

How the Two are Connected

Unfortunately, we don’t 100% know if one causes the other. There is a fallacy in assuming correlation equating to causation. Especially in the medical field. What we do know, however through a series of group studies that have been conducted over the last 15 years that they both show up at the same time.  From what they found was that animals and people who lost more weight, usually after an exercise program or weight loss surgery, saw their own cancer decreasing.

“Despite the limitations of the study designs, there is consistent evidence that higher amounts of body fat are associated with increased risks of a number of cancers.” You read that right. A number, not just one.  13 different types of cancer changed in behavior after the increase and decrease in body fat. But what do they both have in common? What makes both of them grow and shrink before and after weight loss surgery?

It turns out, that the types of cancers that were present in people suffering from obesity both rely on the presence of hormones.  I mentioned this a little in a previous article, but weight gain and weight loss directly influence the production of hormones in a person’s body. That is why it can render people infertile, and decrease their overall sex drive.

Cancers that are hormone-dependent effect the endocrine system, the part of your body that handles hormones.  The mutated cells greedily hoard hormone receptors for estrogen or progesterone, which are responsible for many things involving mood, sex drive, etc.

From there they grow and reproduce without dying out, then try to get way more of those receptors and hormones to keep growing. And what cells can produce hormones like estrogen?  Fat cells.

However, I must stress that this only works with hormone-dependant cancers. If a cancer cell does not need hormones to survive, it will not be relying on fat.

So, if that isn’t a motivator to get weight loss surgery, nothing will be.

If you are looking for a place for weight loss surgery in Decatur or Huntsville Alabama, give us a call or visit our site: www.alabariatrics.com